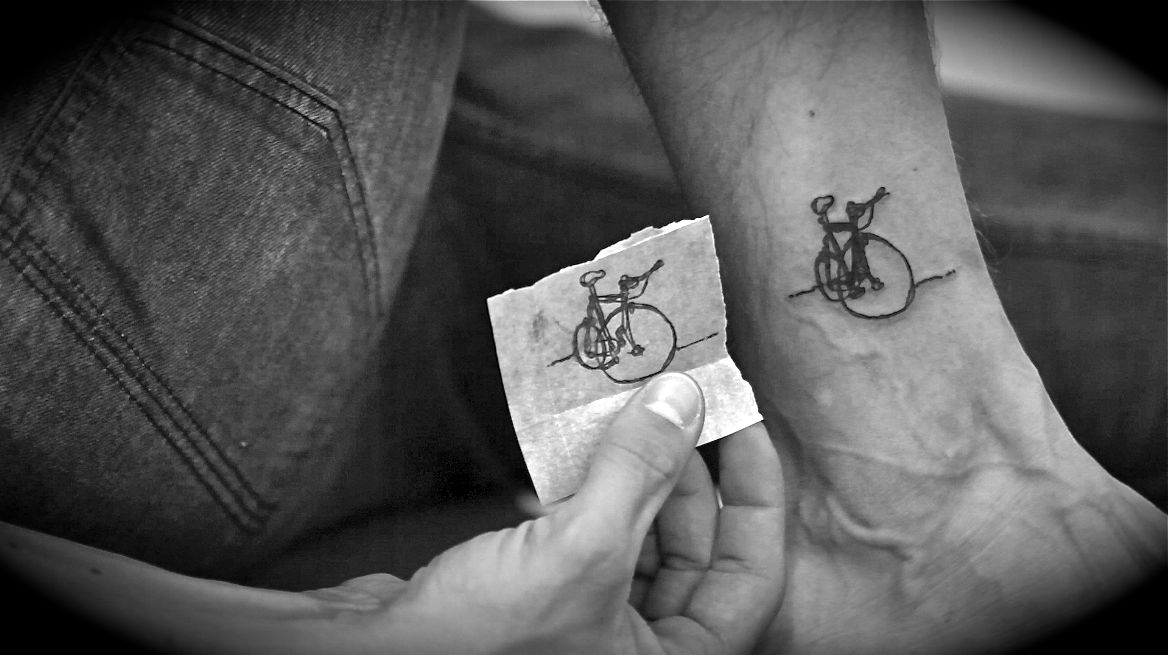 I never thought that I would get myself a tattoo. Before I came to Curitiba for the first time I actually thought tattoos were something horrible. First of all because once you have one its quite impossible to get rid of it. As I am not the most decisive kind of guy I was sure that I’d never be able to decide about a thing that would be marking me for the rest of my life.

When I first came to Curitiba two years ago, I found out that everybody I got to know here had at least one tattoo, or was about to have one done. I became interested and started to like certain tipes and styles. I was even able to assist a giant scull being tattooed on to a girls thigh. However I was still sure that I would never have a tattoo on my body.

Then came the glorious day when a friend from Curitiba who had in the meanwhile become a quite successful film producer called me to make a movie with him. That would have been crazy if they would have called me to come from Germany to Brazil, but they actually made me come all the way from Tehran via Dubai to Curitiba and worse: The made me play an Alien!

I had a few days to get to know the crew before we started filming. One of the guys, his name is Celito, is a tattooer and it happends to be a kind of ritual that everybody who knows him has been tattooed by him. So they would start joking around about how I would surely end up having one too, staying here for all this time. I denied and said that I wouldn’t do it, because its a very serious thing to do and so on… Then I remembered that on our Tour, somewhere in Estern Turkey Maushami had the idea of having a “Tattoo Challenge”. I was amazed by the idea and considered it a great idea, because if we all did it, it would become a  symbol of team spirit and a wonderful memory of  this fantastic trip. Unfortunately we couldn’t convince everybody and I must admit that I felt a bit relieved when the idea was abandoned.

I had thought of a number of conditions that had to be fulfilled in order to make me accept the idea of having a tattoo. Like probably everybody who has his first tattoo done, I wanted it to be special. No predefined, trendy tribal or so. No sculls or anchors either. It had to be a very special occasion, something that when you look at just to be remembered of the moment that it was stung into your skin. And of course I wouldn’t let any unknown creepy tattooer scratsh his dirty ink into my body – hell no!

So here I was, confronted with a nice little guy called something that sound like “little heaven” offering me to tattoo what ever I want, whenever I was ready. I decided to make a challenge demanding the missing amount of money we needed to accomplish our former goal of 10000 Euro until the end of the week. Virtually the minute I posted it on facebook people started to pledge money. Two days later we had the missing 194 Euros on betterplace.org and by sunday we had received more than 450 Euro. I don’t know if all of that money was donated because of the challenge, but I was happy and ready to get the tattoo.

It had to be a bicycle. A bicycle that reminds me of the Guts for Change Tour, this crazy trip to Brazil and the fact that there is still a town in India waiting for the drytoilets to be built. Thanks again to everyone who donated – you are the ones who make all of this possible!!!